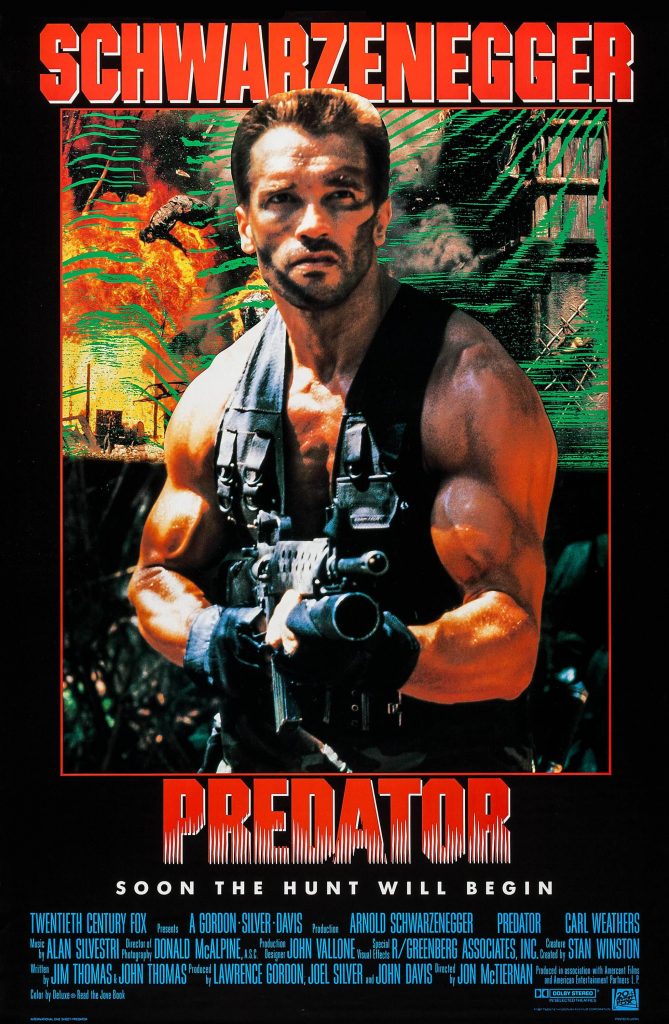 By 1987 Arnold Schwarzenegger had already starred in the multiple movies that defined the action genre (Terminator, Conan the Barbarian, Commando), but it was Predator that really established him as the action star of the 80s.

Presenting us with a story of an alien humanoid life from travelling over to earth for recreational sports hunting (targeting humans), Predator is a mere B-movie ramped up to an A-level blockbuster hit by utilising all the top shelve talent Hollywood had to its avail at the time.

Similarly to Audrey Hepburn in Breakfast at Tiffany’s or Clint Eastwood in A Fistful of Dollars, with Predator Schwarzenegger reached a pinnacle where his character became immortal, and something that transcends human age and passing of time.

This is how we forever remember Schwarzenegger: as a 40-year old still very much in his top form, with a flat top haircut and boasting a magnetic screen presence the few extra years under this his belt and the confidence gained by finally silencing all the naysayers who said he could not cut it as a movie star.

Predator is an action movie that defined its genre so well that its formula still works to date, 35 years after Predator’s theatrical debut. 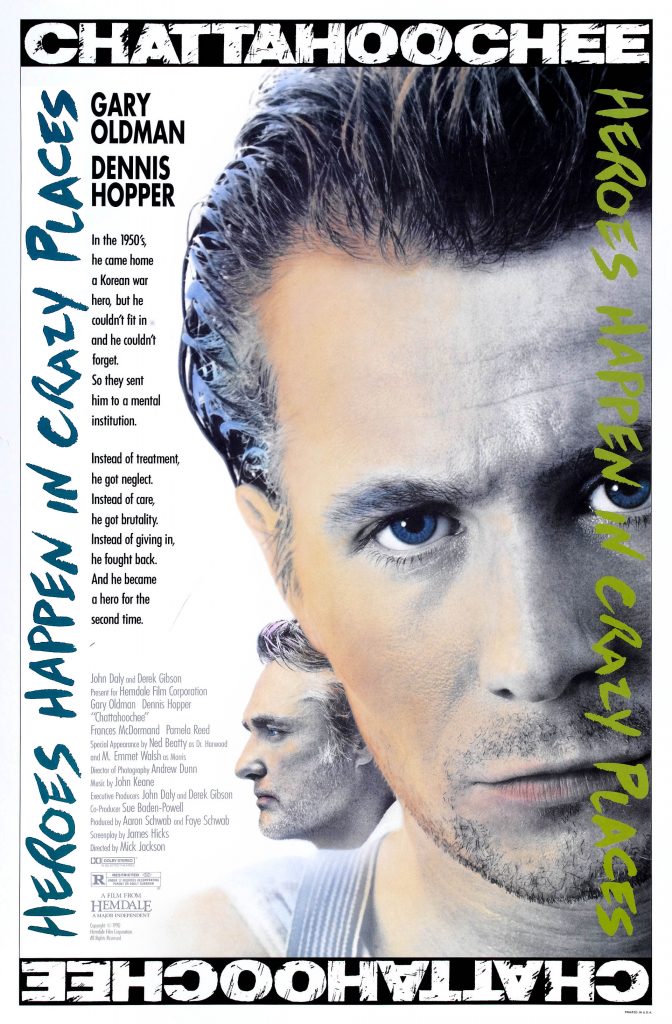 Chattahoochee is based on the life of Chris Calhoun, a Korean war veteran who in 1955 suffered a violent mental breakdown resulting him to be incarcerated in a high security mental health prison in Chattahoochee State Hospital, Florida.

From thereon his problems get worse as the patients of the asylum are subjected to various sorts of abuse. The systematic cruelty was eventually exposed by The Tampa Tribune, aided by the letters that Calhoun wrote while committed.

Chattahoochee features a wonderful story coupled with the strong performance by the wonderful Gary Oldman, but is ultimately held back by a poor screenplay that often fails to portray cause and consequence of various events; we see the violent breakdown, suicide attempt and eventual recovery but never quite understand the catalysts behind them.

Joe Hillerman has a grave problem. His 17-year old has just been killed in a morbid firearm accident and his younger brother who is the sole witness refuses to talk about the incident in detail. Furthermore, he seems mostly inconvenienced about the death rather than showing any other emotions.

Watching The Stone Boy I often got to reminiscence Square Dance, but only in the way how the former underlines how it totally failed to make us feel for any of its characters. With The Stone Boy the absolute opposite is true – and even if we don’t agree with some of the characters, they are written well enough for us to always sympathise with them.

While I don’t feel quite right criticising the work of a child actor, I was admittedly expecting something of an Oscar worthy performance during the movie’s culmination point, but that never came to be. Luckily it’s the more seasoned actors that still make the ending work in a totally satisfactory way.

An eccentric boy moves into neighbourhood to find himself an outsider with the local gangs and clicks – until one of the students finds himself gravitating towards the strange world and poetry inside the boys mind. And soon the others follow.

The title of the movie is something they all then begin to chant together.

The Beat is a totally ridiculous depiction of the youth – high school musical ridiculous – but somehow escapes total cringeworthiness, probably due to its somewhat charming, naïvely honest approach. 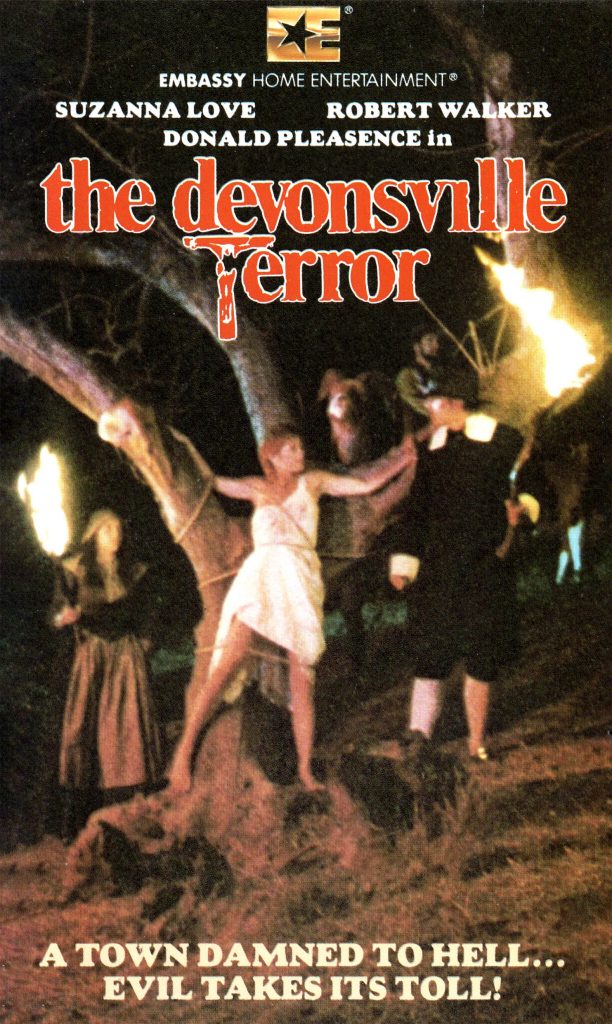 A movie about 16th century witch hunt that has unexpected consequences to the present day, it takes ages for The Devonsville Terror to get to the most interesting parts of the story.

The movie has a strong late 70s British cinema vibe to it, and despite the quite dark themes a scary movie this ain’t.

At the end there is an unexpected surprise that the fans of Raiders of the Lost Ark might be able to appreciate. 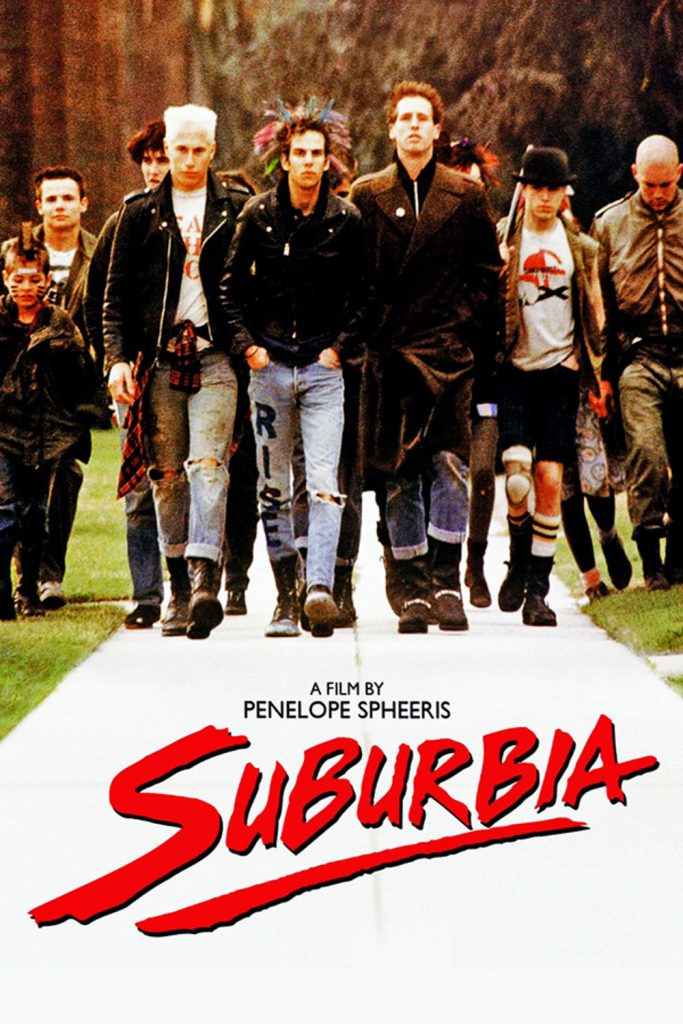 Writing about teens, especially the troubled ones it’s not an easy feat, and can easily turn condescending and cringeworthy. Suburbia get this totally right and its portrayal of the era, including young punk kids is exactly how I remember it to be.

The movie manages to capture both the dark tones as well as the moments of happiness, and the sense of belonging beautifully, true to its characters, without any excessive sappiness.

The array of amateur punk rocker kids cast to the movie (including young Flea of the RHCP fame in his first credited performance) perform their parts admirably. And in case you wonder: yes, Pet Shop Boys were inspired by this movie when composing their hit song of the same name.

The deceased won’t let a Sole Survivor of a devastating airplane crash be.

Preceding Final Destination by 16 years, both share the similar premise of coming back to claim those ear marked for underworld.

Sole Survivor doesn’t quite live up to interesting setup, very unfortunately presenting the impending death as reanimated corpses and never actually taking the idea one notch further. It does play for the benefit for the ending, but events before that are much more tame than they deserve to be. 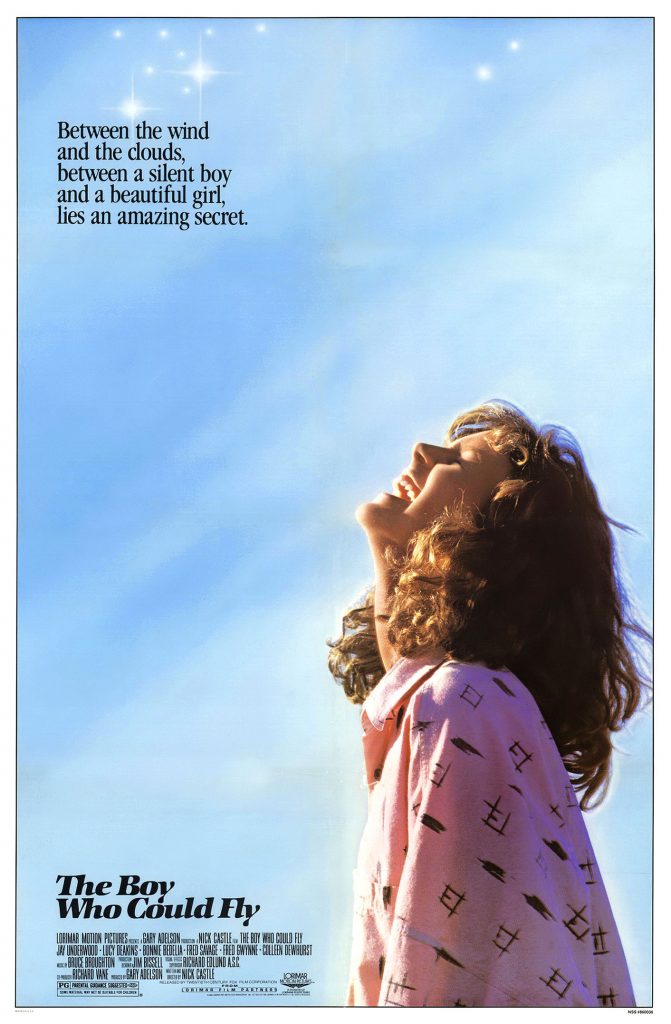 After her family moves to an old house, a 14-year old Milly encounters Eric, a young boy shut in his own world.

Soon after befriending him she begins to wonder if there is more to this boy and in his obsession to paper planes and flying, than meets the eye. Two separate site plots follow Milly’s mother struggling to get back to the now-computerised 80s work life, as well as her brother’s struggle with the neighbourhood bullies.

The Boy Who Could Fly is a brief and likeable peek into the life of a suburban family encountering wonderful events, most of which I unfortunately struggled to identify with.

I’m not quite sure if it’s an accidental or intentional, but Island Claws is a flawless homage to the 1950s gigantic monster movies.

In fact, it totally looks and feels as if some old black-and-white movie had been AI coloured posthumously. The small village, idyllic little bar, main male leads and the research faculty are all charmingly familiar.

It’s therefore a shame such a nice set up is wasted on a totally average monster movie. I would’ve much preferred seeing some kind of a thriller/drama taking place in this same setting, instead of this low-quality monster nonsense. 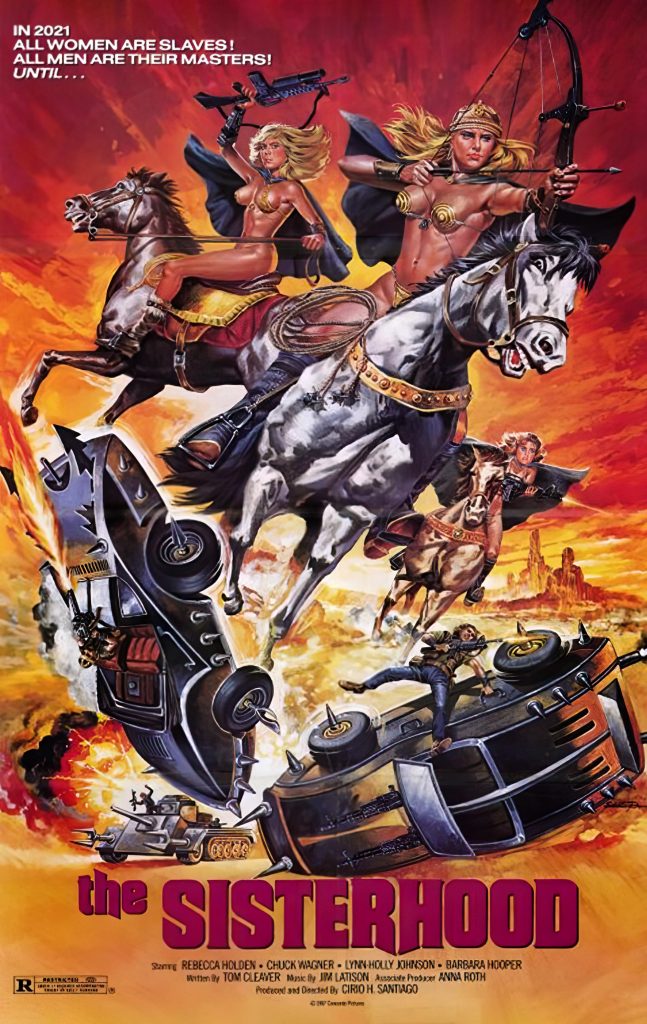 One of those dystopian wasteland movies, The Sisterhood brings very little new to the table but slightly improved production values over its early 80s counterparts, but still clearly falling behind of the fidelity seen in the Mad Max series of movies.

Here we follow a clique called The Sisterhood that possesses supernatural powers as they make their way through the wasteland trying to free the women captured by the evil tribes of the desert.

The movie consists mostly of driving sequences, shot in a sand pit of some sort with vehicles quite lazily modified of their 1970s and 1980s originals. 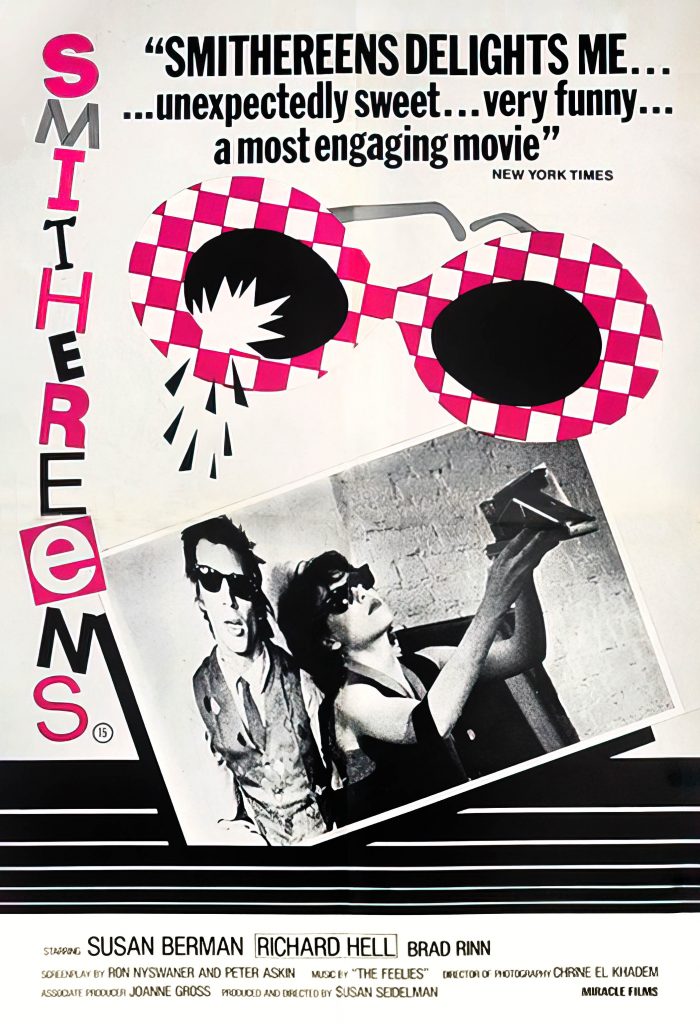 Smithereens is a low budget in the production depicting a young girl in the early 80s New York punk scene who’s determined she is destined for greatness, despite lacking any talent to make it.

Instead, she tries to hang around local small time music celebrities and makes one bad choice after another that cost her her apartment, friends and generally always seem to take her further away from recognitions she’s after.

I found the movie slow and mostly uninteresting to watch, but it did stick with me later on, thanks to its sincerity, and quite original plot – so, not a total stinker. 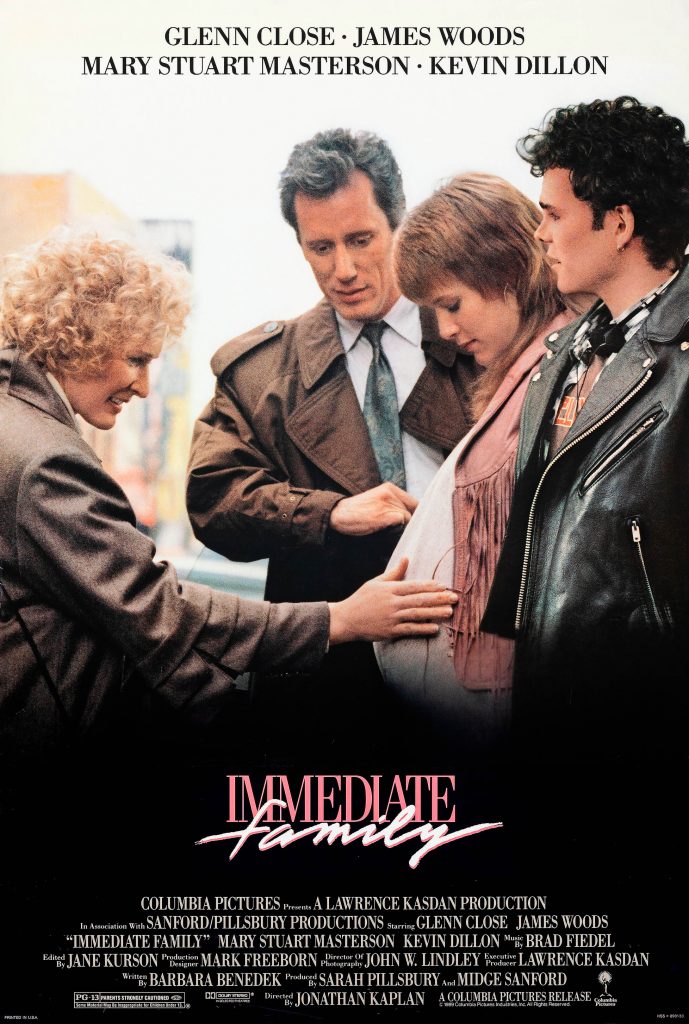 I keep of finding the oddest movies I at first don’t remember watching before, but throughout the movie I have this nagging feeling I’ve seen them before. With Immediate Family this became apparent as soon as Mary Stuart Masterson was introduced as a teen mother giving her to-be-born child for adoption to a couple unable to bear children of their own.

A movie about teenage pregnancy as much as dealing with infertility, Immediate Family plays just the right notes throughout the movie, but for some reason the movie ends up less than the sum of its first class parts. 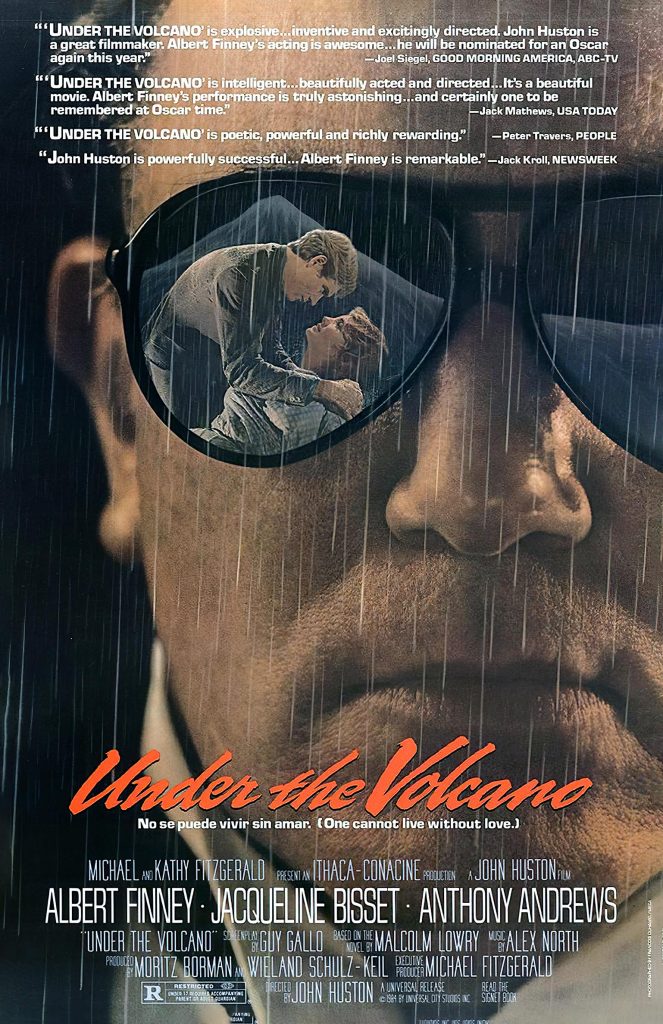 Out of the alcoholic consuls stuck somewhere in the Southern America (Beyond the Limit being the other one), Under the Volcano makes for a stronger contestant.

Although quite different kind of beasts, what both movies have in common on top of heavy drinking is the highly volatile political situation. But with Under the Volcano the emphasis of the thriller and drama elements are more on whether the main character will manage to overcome his alcoholism and demons in the moment when happy ever after is being served to him on a silver platter.

What really makes Under the Volcano is the outstanding performance by Albert Finney whose work as the highly intellectual and sympathetic consul Firmin is often over the board, but never even closely forced nor insincere. 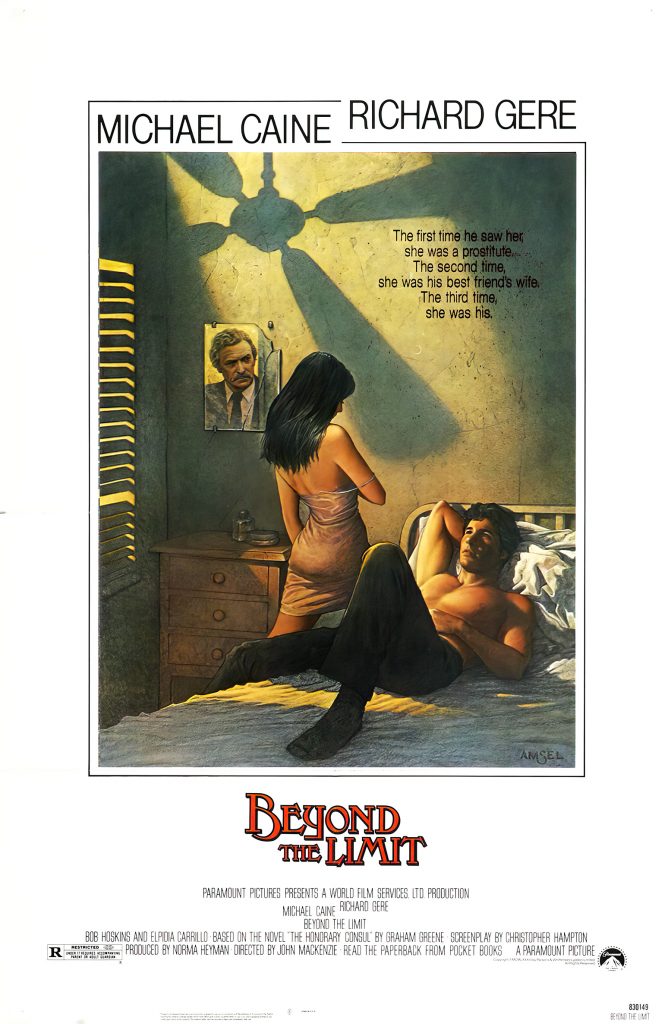 The weird coincidences the I come across watching all these 80s movies never seize to amaze me: I watched two movies about alcoholic Consuls stuck somewhere in the South Africa almost back to back.

Beyond the Limit is the weaker one of these and it being of British origin it was one of those movies I was on the verge whether I should include it to this movie watching project. Ultimately it was Richard Gere, playing a callous doctor who lusts after the Consul’s (Michael Caine) young wife.

While the movie manages to find a captivating tone of voice during its run time, it’s the final surprising and interesting events that fortunately redeem many of the movie’s shortcomings during the last 20 minutes.