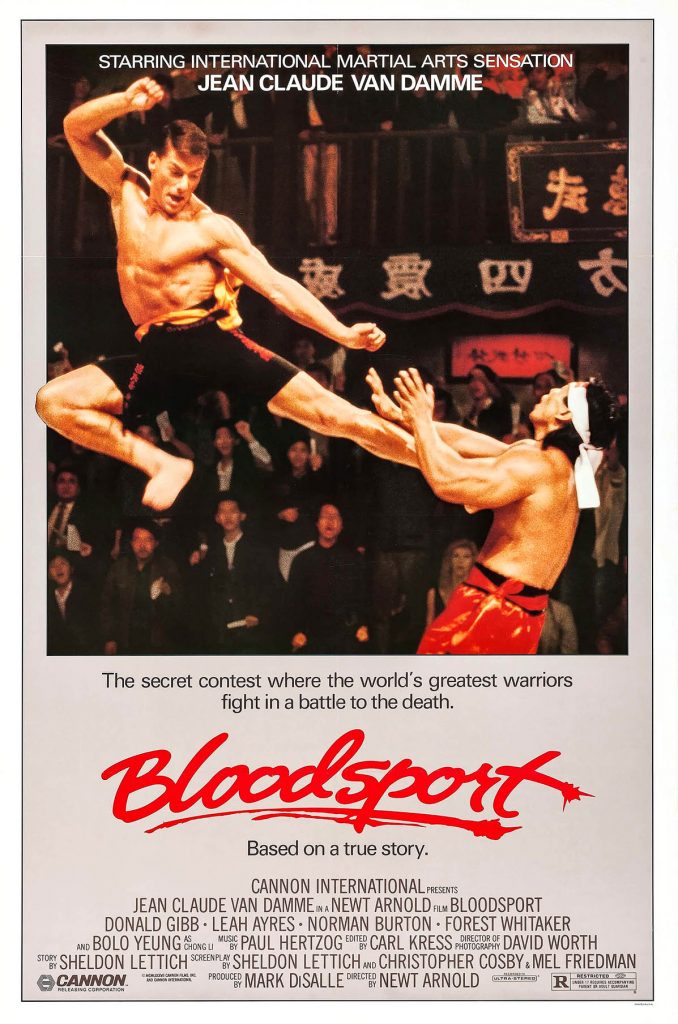 Bloodsport, one of the definite martial arts / sports movies of the 80s still delivers!

While Jean-Claude Van Damme’s career is patchy to say the least, it’s here that he is at his very best, presenting impressive moves and showing certain on screen charism. Donald Gibb feels at first like an odd match for Van Damme, but ends up making the movie much more memorable than a more conventional choice.

The movie is just the right amount over the edge and built to push all the right buttons for the fans of the genre; Bloodsport aims to entertain, and it does so with flying colors (and kicks). 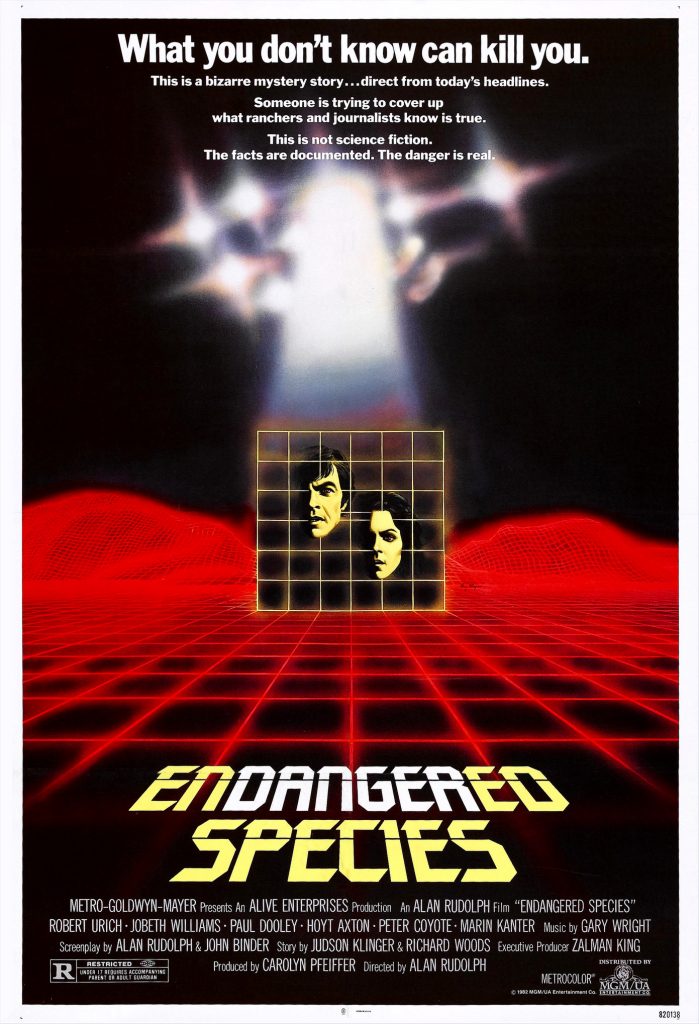 Funny how some things blend into one in your memory when you don’t put your thoughts on a paper right after seeing a movie. I watched Endangered Species about two weeks ago along with The Return and they’ve turned into one and the same movie in my head.

But I’m not completely to be blamed here as the similarities are many: both movies have a supernatural theme, take place in a small distant town and feature a liaison between a stranger coming to the town and a local law enforcement officer, with one of them battling alcoholism.

I can’t see myself watching either one again, but for the future reference, Endangered Species is the stronger one of the two, with a more solid and interesting story about government cover ups. But unlike The Return that went far too much into the supernatural, Endangered Species left me wishing it would’ve leaned even more to huge conspiration theories that its premise is built upon. Now it manages to build up the story and whet my appetite, but does not provide the big payback I so craved for in the end. 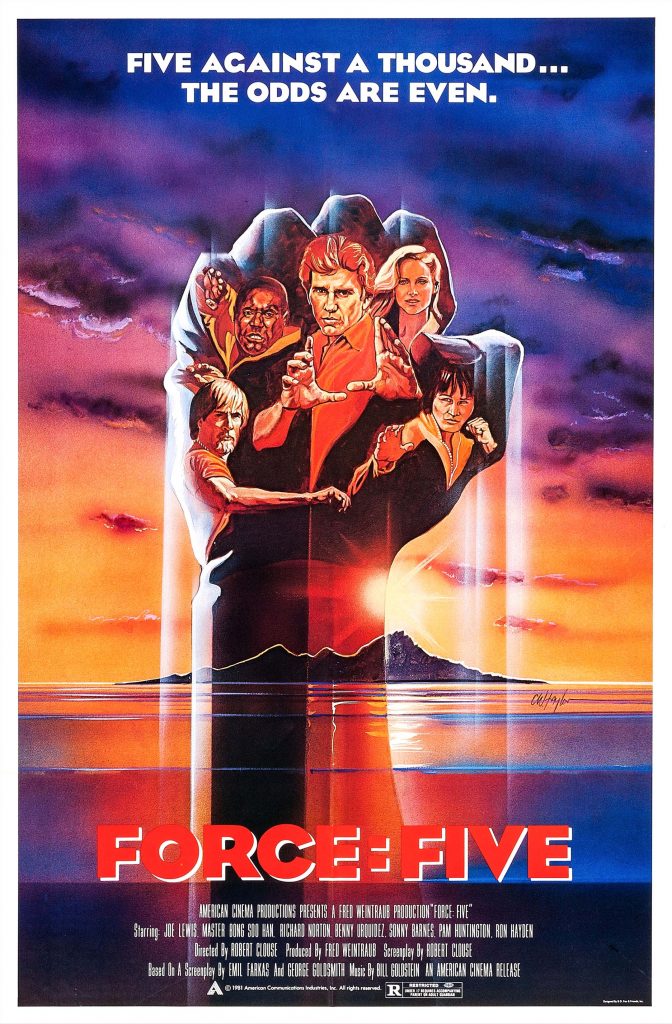 Force: Five is one of those early 80s action movies that you should pick up on VHS. I watched the movie from a pristine bluray copy and the movie seems to have lost a little something in translation.

I guess this goes with all of the ninja type of movies, although Force: Five technically isn’t one. Led by the legendary kickboxer Joe Lewis, the movie follows a oddball martial arts special force put together to get rid of a religious cult involved in shady business in a faraway island.

I did not fall in love with the movie, but it did get into that cozy feeling of picturing myself finding this movie on a dodgy rental tape sometime in the 80s – and having a not too bad movie night with it.

Pretty Smart is a totally useless comedy that introduces lots of ingredients seen in other films of the era, but lacks the ability to do anything new or creative with them.

This wouldn’t be a problem if the movie had some other qualities going for it, but with the exception of ok production quality, Pretty Smart is a totally soulless creation that has next to nothing enjoyable in it; not in its theme, in its humour, the characters and nor the mediterranean setting. 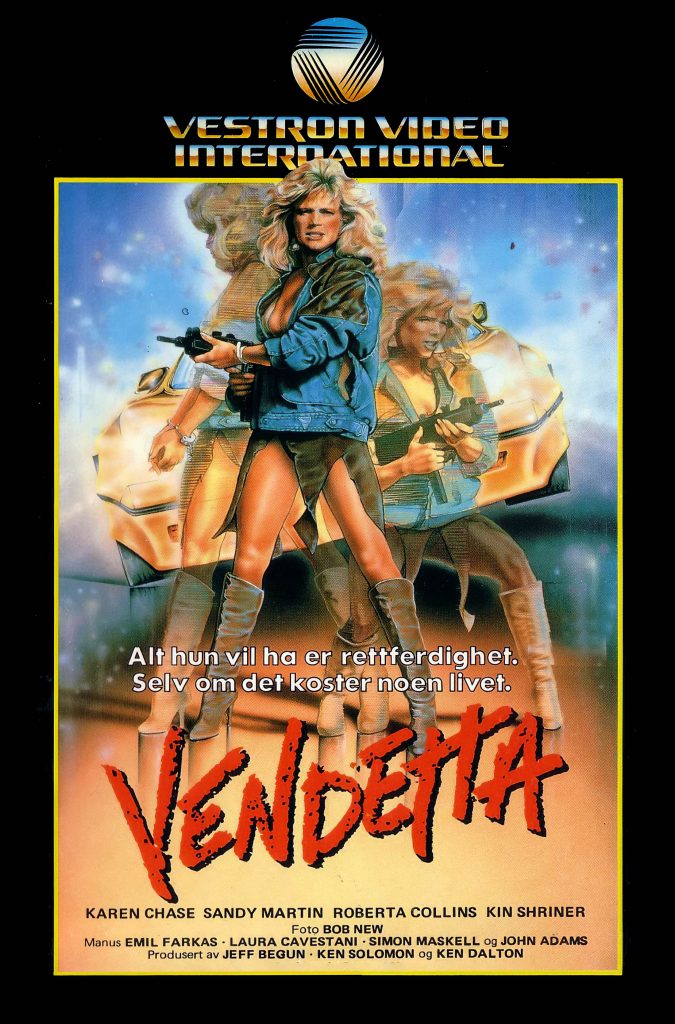 Similarly to the World Gone Wild I just reviewed, Vendetta takes an uninteresting genre as its base, but actually tries to have a fresh approach. In Vendetta’s case this genre is the women’s prison exploitations that usually exist to serve people with a fetish for catfights, rapes and plenty of nude scenes. 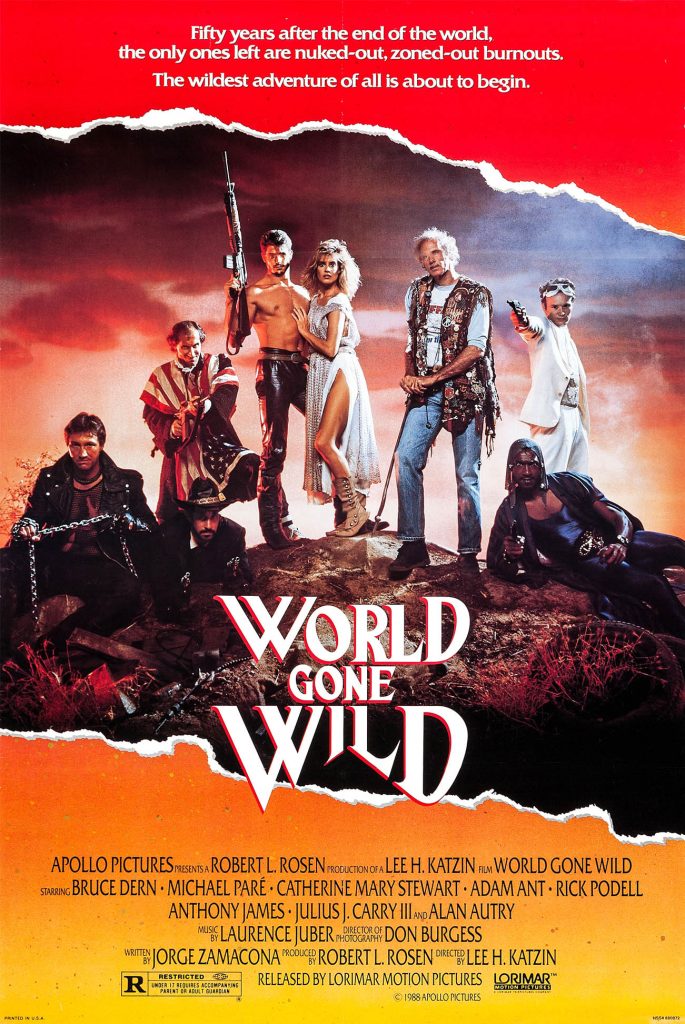 World Gone Wild starts off as your typical dystopian wastelands Mad Max ripoff – a genre I’ve never cared for – but gets a lot more interesting as the gang of outcasts led by Michael Paré join their forces to get even with a religious cult (led by Adam Ant) terrorising communities outside the city.

Sure, the movie now turns more into a Seven Samurai ripoff, but one that manages to find its own tone of voice. I particularly enjoyed the side plot line involving the treacherous baddie biker that plays out in a very satisfactory fashion.

Visually the movie is solid enough, although most of the gear people wear make the tone like a bunch of 80s types had a cheap dystopian live action roleplay. 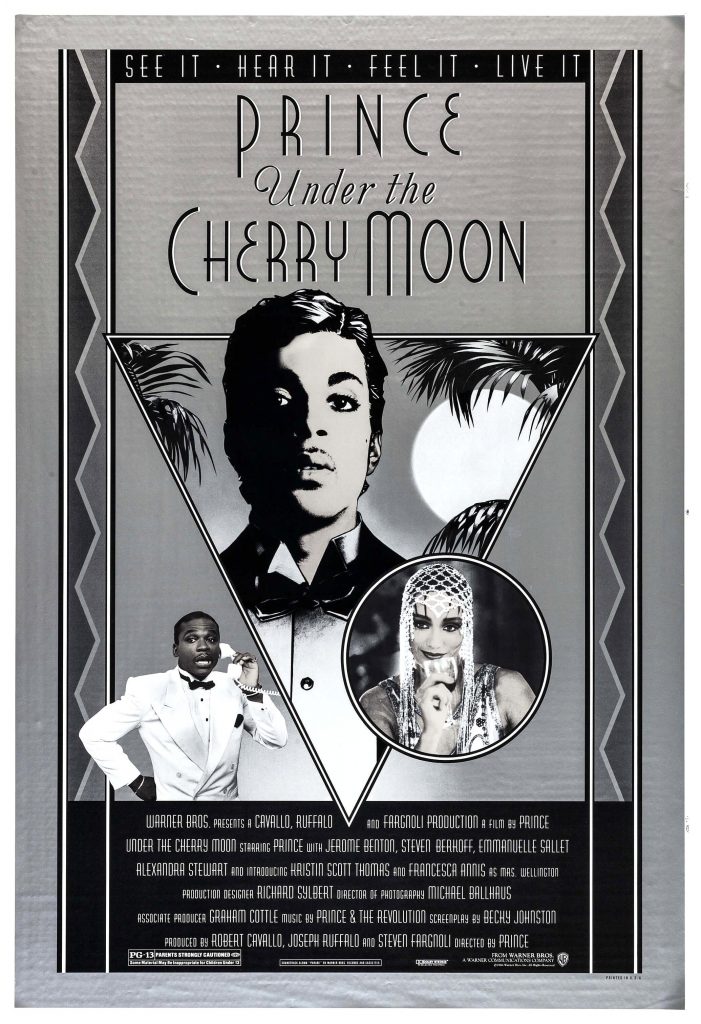 Many first row entertainers of the music industry got into acting during the 80s, some doing better than the others. Prince’s sheer geniusness with music never translated to other arts he tried, and movies are not an exception.

The fact that the movie was at first shot in color, but rendered to black & white afterwards for artistic touch underlines the pretentious tone of the movie. The only thing that work here are the musical numbers, but they are few and far between, and without the visual prowess seen in Purple Moon. 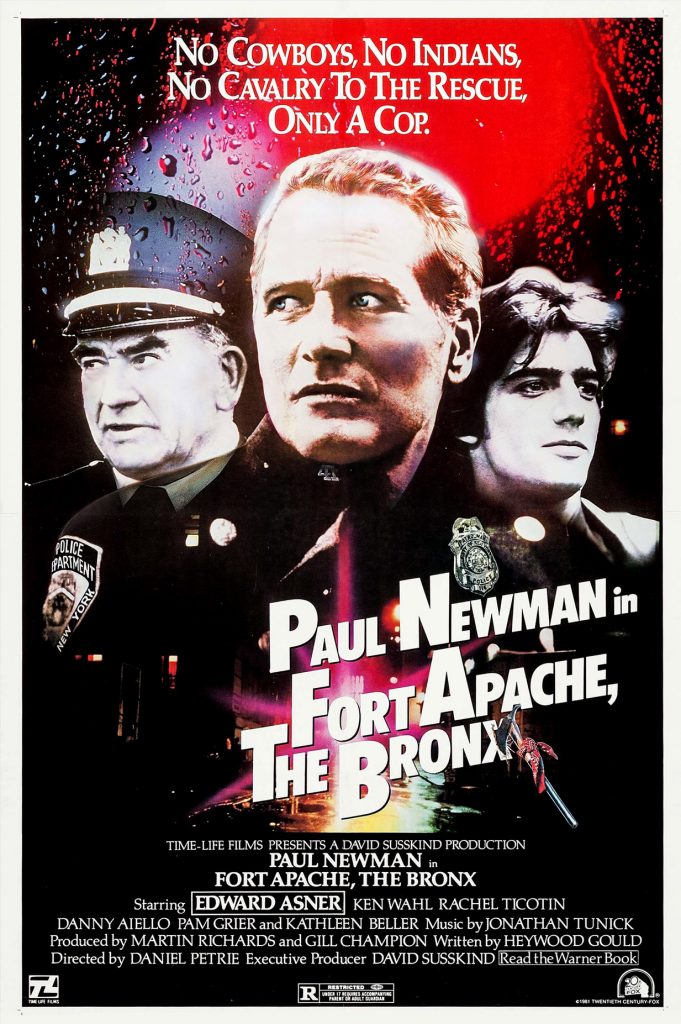 New York of the early 80s was a hostile place with crime and deaths on the rise year after another, homicides peaking at 2000s at worst – and Bronx had a notorious reputation even for New Yorkers.

Fort Apache the Bronx follows the everyday life of two cops, one veteran and and his younger partner in one particularly colorful precinct in Bronx. Officer Murphy – played by Paul Newman – is disillusioned and nihilistic on the surface, but always shows a great sense of discretion and ingenuity when defusing situations, with a confidence that only having a good understanding of (and affection for) the community for many years can bring.

Fans of Paul Newman will be at home with the movie as Fort Apache the Bronx showcases Newman at his very peak. The way the movie shows the life of a cop in a realistic fashion was new and fresh at the time (and it still holds up surprisingly well), but the 70s heritage of cinema is strong with the movie – especially in the way its actions scenes are shot. 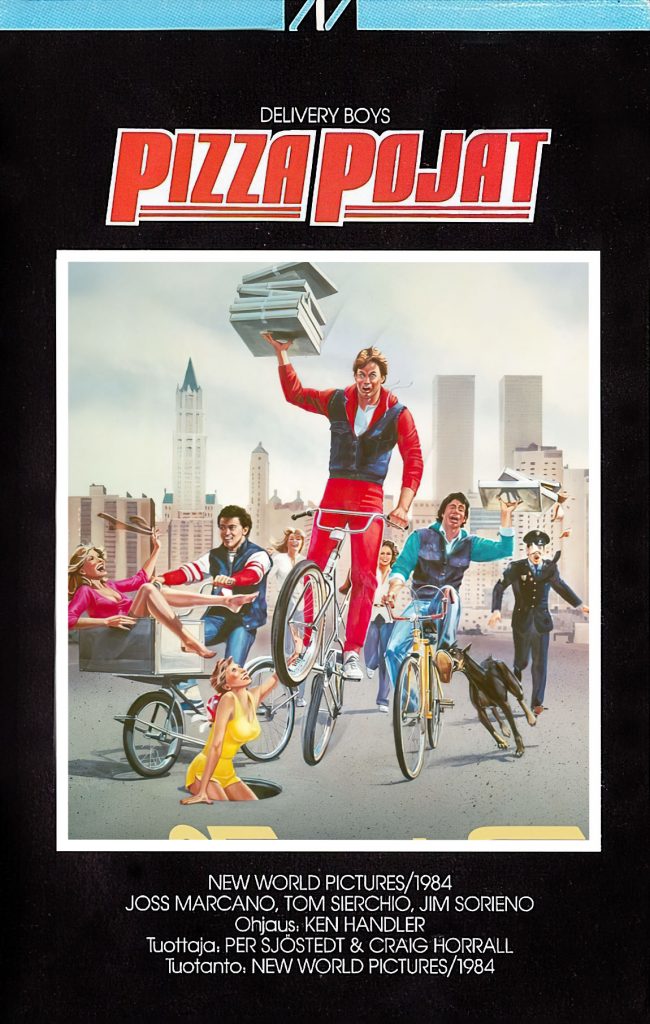 The never-heard-before Delivery Boys is a comedy with a typical problem of the team not having a proper focus. This results as the movie being an uneven collection of adolescent sex comedy, a musical and a serious film about break dancing, as if it was patched together from the leftovers of three different movies.

Delivery Boys would’ve worked much better as a showcase to the 1985 New York and to its breakdance / hiphop scene with the comedy bits somehow related to that theme.

Someone is sending Julie, a local columnist, threat notes and killing people in her therapy group one by one using a pair of scissors as the murder weapon.

The unappetizingly named Schizoid marches to the stage a bunch of shady characters that all seem to have their dark sides and leaves the viewer doing the whodunnit guesswork of figuring out which one of the likable suspects did the killings, or – you guessed it – is it someone much less likable.

While I’m always wondering the movie world’s eagerness to cast Klaus Kinski who always seems like playing the same role through every movie, in Schizoid the director David Paulsen seems to be able to keep him in control and he manages in the role like any other bulk actor. 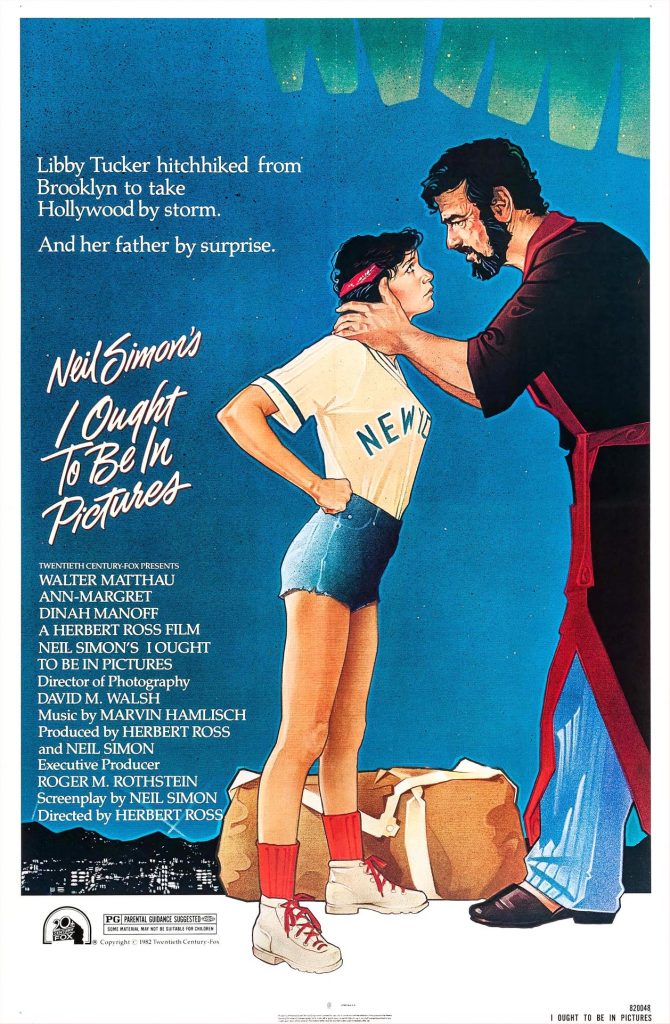 The playwright Neil Simon churned out mediocre scripts through the seventies and the eighties in a breathtaking pace – so much that his name became something of a brand that was printed in a poster right before the title of the movie. I can’t but to wonder the producers’ urge to jump into making filmatised versions out of these plays since, well .. they’re just not particularly good movie material.

True to his style of writing plays about people involved in show business – producers, actors, authors – I Ought to Be in Pictures is also about people of the Hollywood. I’m guessing the charm of revealing the banal side of entertainment business for us the common people was there back in the 80s, but from today’s point of view that charm train has left the station.

I Ought to Be in Pictures is an extremely tedious movie to watch and seems to drag on and on and on without getting anywhere. The characters are unappealing (and, somewhat annoying), and regularly written in situations or mood swings that seem more forced than natural. The dialogue and the way the actors deliver it tries to be always cute, but never actually ends up clever or snappy enough to be delightful, making the movie extra laborious to watch.